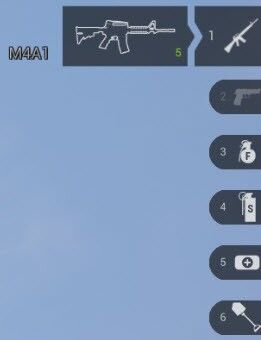 You select a weapon or equipment with the number keys 1 to 0 or your mouse-wheel.

Keep in mind that all weapons and tools require some time to equip, reload, and unequip. Some animations, such as reloading a rocket launcher or a Light Machine Gun (LMG), can be significantly lengthy. Plan your actions ahead of time to avoid being caught off-guard. You can cancel the equipping/reloading animation of a weapon at any time in order to quickly equip another weapon.

Certain weapons have the ability to transition seamlessly between one another. This includes:

When you press such key or move the mouse-wheel you will see your inventory HUD appear for a short duration.

The inventory HUD is divided into item groups. Each item group is accessed with a specific keyboard shortcut. As these groups are the same for all roles, you will not have to remember varying shortcuts for the different roles. The item groups are:

Some item groups contain multiple weapons/equipment – in the inventory HUD, this is indicated by a plus symbol ("+"). Press the same shortcut again to choose between items in this slot.

For guns, you will see the number of unused magazines as a number next to the selected weapon. If a role does not possess a weapon of a particular item group or you used up all ammo, it will be shown as greyed-out in the inventory HUD.

Fire your gun with the Left-Mouse-Button. Aim down the sight of your weapon with the Right-Mouse-Button to drastically increase your accuracy (generally, aiming down sight with iron sights is faster than all other forms of sighting systems). While in aim down sight, hold Left-Shift to temporarily hold your breath in order to stabilize your weapon and zoom in (not possible with, scopes, grenades; also not possible if you are out of stamina or under suppressive fire). Change the firing mode of your weapon (if available) by pressing the Mouse-Wheel or by pressing the same weapon shortcut key again. Reload your weapon with R. Note that you can cancel the equipping/reloading of a weapon at any time and select another weapon extremely quickly.

The length of your weapon plays a factor in how you maneuver through tight spaces and fire from cover. When you are too close to an obstacle or a surface, your weapon will be forcibly lowered and you will be prevented from firing and aiming down the sights. This naturally depends on the weapon in question, so bringing a long marksman rifle into small spaces is ill-advised, whereas pistols will have a natural advantage in these tight spaces.

You can toggle aim down sight (ADS) in the settings under "Game Settings" (not under "Controls"!)

Weapon sway and recoil behave differently depending on your stance. Crouching will steady your weapon and improve accuracy. Crawling significantly improves weapon stability (and also reduces your silhouette, making you a smaller target.)

Deployable Bipods have been added to all Light Machine Guns (LMGs), General Purpose Machine Guns (GPMGs) (press C) and some sniper rifles. Bipods will allow machine gunners to set up on positions and put down a large volume of fire with terrifying accuracy. Bipods can be deployed on virtually any surface, including other players as long as they don't move.

A vast majority of weapons have the ability to adjust their sights to shoot at different ranges (default: X + Scroll Wheel). This includes grenade launchers, rocket launchers and rifles. Certain optics also have the ability to be adjusted, like the M110 SASS' scope, and the SVD's PSO-1 scope.

For melee attack all soldiers are equipped with knives. The knife is very useful for stealth kills from behind.

Grenades from a grenade launcher and rockets from a rocket launcher will not explode on short distance. Make sure to fire at least 15 meters away.

Use the shovel by holding down either the Left-Mouse-Button or the Right-Mouse-Button depending on whether you want to build or take down a deployable. Read more about it on "Deployable objects" page.

Use bandages and the medical Kit to heal yourself and others. For more on how to use medical equipment, see "Health Management" page.

When using ADS (Aim Down Sight) you're looking through the optic, it should be noted that the barrel of your firearm, however, is below your optic and may be obstructed by geometry which can impede any rounds fired from your weapon. Before firing any weapon from cover it is advisable to make a note of this.

Fatigue now effects your weapon sway, so make sure you're not in the red area on your fatigue bar.

You can resupply your ammo at ammo crates and vehicles. Stand next to it, press F to interact with it, then select "resupply" with the mouse and click the Left-Mouse-Button.

There are four different choices that you can have

Ammo crates can be placed by a SL within 150ms of a FOBs (see section "Deployables"). You will also always find ammo crates in your BCP. Ammo crates are also shown on the map (see "Using the map").

Besides resupplying, you can also change your role at an ammo crate – see section "Kit Role Selection".

Most vehicles supply several kits that can be switched to by interacting with the vehicle.

When coming under enemy fire, your vision will become blurred. During these situations, it is best to stay in cover until the incoming fire has ceased.

When being shot at, incoming rounds will interrupt your aiming by increasing the amount of sway you experience. The more rounds fired at you, the more suppression you will experience. Larger caliber rounds will generate more of a suppression effect on you. You will not experience suppression if the fire is coming in from less than 10m away. Friendly forces will not be able to suppress you.

RPG-7 allows you to change from FRAG to HEAT rounds to achieve this you press again the 3 key this will change to the second weapon type. You can also use this technique to change smoke grenades with the Grenade Launcher, by pressing the 4 key again. Remember if the tube is empty you still need to reload before use.

Tip for RPG-Soldiers: Change to HEAT round before you move again, just in case you get surprised by enemy vehicles.