The Ural-375D is a general purpose off-road 6x6 truck designed and manufactured by the Ural Automotive Plant (UAP) in 1964. The Ural-375D is a variant of the Ural-375, which was designed and manufactured by the same company in 1961 to replace the aging ZIL-157 truck that was the mainstay of the Soviet Army. The Ural 375 is a general purpose vehicle which fills a wide variety of roles such as a tractor trailer, box truck, military transport, artillery tower, etc. The UAP created the Ural-375D variant in 1964, upgrades included an all-metal cab, full-time all-wheel drive and a new role as a mount for the BM-21 "Grad" Rocket Launcher. Production of the Ural-375 stopped when production of the Ural-375D began in 1964 and its own production stopped in 1983, when the Ural-4320 introduced further upgrades and became the new truck of choice. Even after the introduction of the 4320, the 375D continued to serve until the dissolution of the Soviet Union in 1991, and stayed in service with the RGF afterwards. Although no longer the front-line vehicle of choice for the Russians, the 375D was exported to nations around the world, and as such can still be seen in operations within those countries.

The Ural-375D was used by the RGF in-game until it got replaced by the Ural-4320. As of now, the Ural-375D is used by the Irregular Militia as a transport and logistics vehicle, while the Insurgents also use it as an anti-aircraft gun platform. 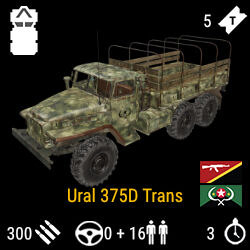 The Ural-375D Transport variant is best for fast movement of a squad to different places around the map. It is available to the Irregular Militia only.

The Ural-375D Logistics variant exchanges its passenger capacity for carrying supplies to squads to build forward operating bases. It is available to the Irregular Militia and the Insurgents (in civilian colors only).[1] 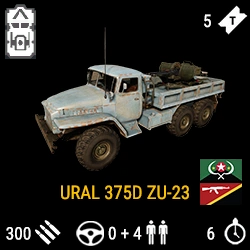 Armed with the ZU-23-2 anti-air autocannon, this Ural-375D can inflict harsh damage on approaching enemy aircraft as well as nearby infantrymen. It is available to the Insurgents only.[1]