The UH-60M Grouse is an air support vehicle in Squad. The UH-60M is the standard tactical utility transport helicopter of the United States Army (US Army). It was added in the Alpha 16 update. 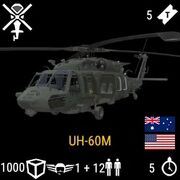