Territory Control (TC) is a game mode featured in Squad. It was re-added to the game in version A14.

The goal of the game mode is to either a) have the other team run out of tickets or b) capture 95% of all hexes. As ticket counts are generally high in this game mode games tend to be very long and drawn out.

Hexes are a hexagonal shaped Control Points that are connected to another hex. 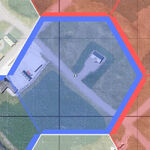 On initial spawn a few of these hexes will already be captured for both sides and will be connected to neutral hexes which only require one player to capture. Capturable hexes will be slightly less opaque and have a blue border with a friendly owned hex. Enemy hexes will also show this border and less opaqueness but instead are tinted red. Enemy hexes need at minimum 3 players or one more than the enemy within the control point to be captured.

The Anchor Hex is the starting point of s teams capture chain. This hex has an anchor icon on it - other hexes must be connected to the Anchor Hex in order to not be cut off. Capturing the enemies Anchor Hex will prevent the enemy team from taking new territory and contesting any hex.

Hexes that have no connection to the Anchor Hex have several grey strips over them. These cut off hexes cannot be recaptured by friendly players until they are reconnected to the Anchor hex territory. Friendlies will also not be able to stop the capture of the contested territory, meaning if the enemy has 3 players within the hex they will start to neutralize/cap the hex.

A few key rules for gameplay: