The Technical is a general purpose vehicle platform available in Squad. In real life, the Technical has been used by many standing armies, irregular military, and guerrilla forces, serving many roles, including transportation, logistics, and fire support.

Technical is a neologism for a light improvised fighting vehicle, usually a civilian pick-up truck or other 4-wheel drive vehicles. Technicals can be used for many purposes such as transporting soldiers, supplying forward-operating bases (FOB), as well as a fire support vehicle. The Technical can be mounted with a machine gun, anti-tank gun, missile launchers, etc. Technicals have been used since the 1970s as light armored cavalry by many standing armies, irregular military, and guerrilla forces: usually Middle Eastern and African.

The Technical is heavily used by the unconventional forces; the Insurgents and the Irregular Militia. It is the fastest and most nimble vehicle in-game, but also the most vulnerable, even from small arms fire. Given the number of variants, including logistics and transportation, the Technical is one of the most common vehicles in Squad, available on every Insurgent or Irregular Militia map.

This variant is best for fast movement of a squad to different places around the map. It can carry a full squad worth of infantrymen.

The Armed Technical is equipped with a 12.7mm DShK heavy machine gun, excellent for mowing down infantry and capable of destroying some vehicles. Similar to the emplaced DShK, there are variants with and without a gunshield. The shielded DShK offers some protection to the gunner at the expense of reduced visibility. The DShK Technical is available in an armored version, offering more protection for passengers and crew as well as more resistance to damage. It it still relatively weak compared to all other armoured vehicles. 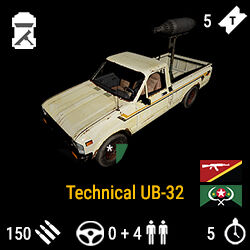 The UB-32 Rocket Artillery Technical is equipped with an unguided rocket pod (probably from a helicopter) mounted on a strut. Used for long range suppression fire. The gunner adjusts elevation with the W and S keys, horizontal orientation with A and D, and fires with LMB. Most effective when used with a spotter and on open terrain as the rockets do not penetrate structures, allowing hostile Infantry to easily take cover and avoid them. The rocket artillery has low firing accuracy. As of V14, the gunner has been given a simplistic azimuth indicator and a azimuth/range chart to make for more accurate firing.

The SPG-9 Technical is armed with a dedicated SPG-9 Kopye recoilless gun. The SPG-9 is capable of firing High Explosive Anti-Tank (HEAT) rounds to combat vehicles and Fragmentation Rounds when engaging infantry. The gunner is extremely exposed when engaging the enemy, making this weapon suited for hit-and-run tactics and not head-on engagements. The SPG-9 Technical is available as an armored version, giving it more protection for passengers and making it more resilient to damage. The gunner however, is still exposed.