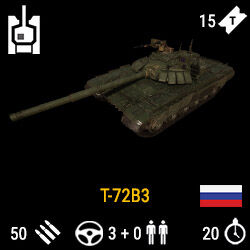 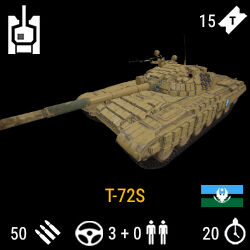 The T-72 is a second-generation main battle tank that entered production in 1971. It was designed by Uralvagonzavod from 1967 to 1973. The T-72 entered service in the Soviet Army in 1973 and was widely produced and exported, with more than 25,000 units seeing service in 40 countries. The Russian Ground Forces continuously updated and modernized the T-72 main battle tanks, producing several variants of it until the T-14 Armata entered service. Other operators of the T-72 have also created their own variants.

The T-72B variant entered service with Russia in 1985 and underwent numerous modifications over the years, one of the most recent of which is the T-72B3 which entered service in 2013. The modernization program brings the tank’s performance near that of the T-90A at a significantly lower cost allowing T-72B3 modernization to replace T-90A production. The outcome of the endeavor is increased firepower, a minor improvement in mobility, and no significant changes to survivability.