When you join a match, you will be auto-assigned to one team, depending on the player spread on the server (shown by the green "Continue" button below the team description).

You can switch teams by clicking on Click to join on the opposing team. However, be aware that auto-balancing might prevent you from switching teams, if it would make the player count too unbalanced (this depends on server configuration, which might vary). There's also a timer which prevents you from switching teams again after you recently switched teams.

You can switch teams later in the match by entering the teams info tab when you're dead or by pressing ↵ Enter. If you are currently alive, you will automatically suicide when switching teams. 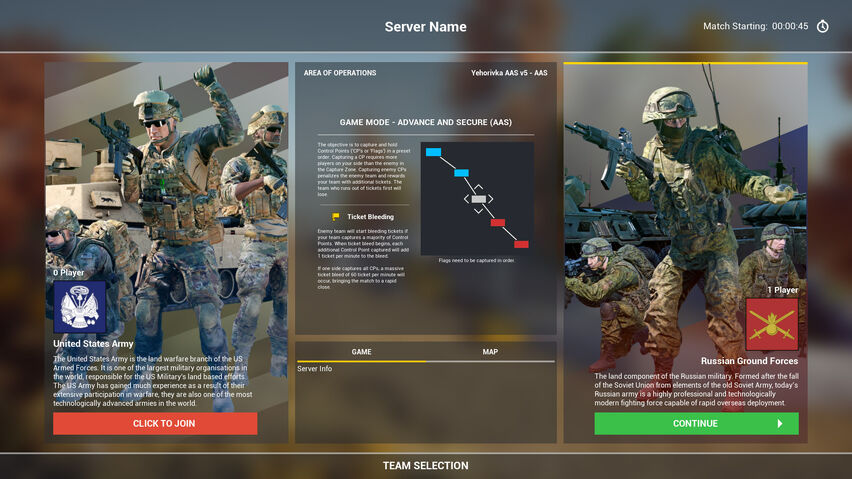 Joining, creating and managing a Squad[]

In the TEAM tab of the spawn screen you can choose to join an existing squad or create a new squad. If you click on the arrow symbol left to the squad's name, you can collapse/expand its squad member list. 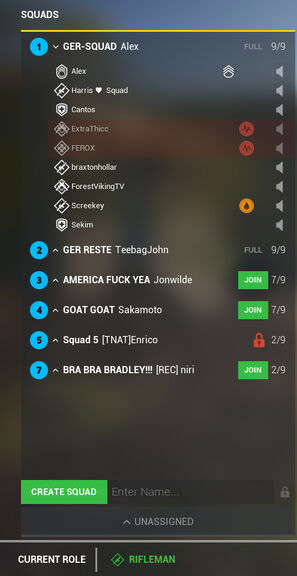 To join an existing squad, click on the JOIN button of the squad you want to join. If the squad is already full (maximum 9 members), you cannot join the squad. A squad leader may choose to invite you to their squad. A little popup will appear for a short time in which you can accept (Page Up) or decline (Page Down) the invitation.

To leave a squad, click on its LEAVE button in the spawn screen. Note that you can leave and join squads at any time, you do not need to be dead. When you leave a squad, you will lose your role/kit.

To create a new squad, click the CREATE SQUAD button. This will create a new squad with an automatically assigned squad name. You can edit this default name before you create the squad. If you enter your own squad name, please choose a useful name. For example specify the role you intend to fulfill (e.g. "defense" to indicate you will be defending CPs) or the composition of your team (e.g. "GER_Team" to indicate German players are in this squad and are most likely speaking German). Or maybe you want to use your clan name. After you created the squad, you can no longer change its name - you have to leave and create a new squad under a new name instead. When you create a squad, you will automatically be its Squad Leader (SL). It is highly recommended that the squad leader uses one of the Squad leader kits.

Besides a name, all squads are assigned a sequential squad number. The first squad receives "one", the second squad is "two", etc. If the Squad Leader leaves a squad the person next in line will automatically become the Squad Leader. The sequence is determined by the order in which members joined the squad since its creation. The first person who joined the squad will be the next person in line when the original Squad Leader leaves. But it is recommended before leaving to discuss who could best take the leadership role and then directly assign the role to them.

The Squad Leader uses the Squad tab as a squad management tool.