The Simir is a light attack vehicle featured in Squad which is exclusive to the Middle Eastern Alliance. It was added in the official v1.0 release.

The Simir is a vehicle created by the developers solely for the purpose of Squad and does not actually exist in the real world like many of the other in-game vehicles. Even so, it is extremely similar to many light utility vehicles used by armies the world over, and as such, its general characteristics can be assumed to be in-line with real world counterparts. Vehicles like the UAZ-469, Willys MB, Volkswagen Iltis, Agrale Marruá, and Mercedes-Benz G-Wagen.

The Simir serves as a transport, light logistics, and light attack vehicle of the Middle Eastern Alliance. As such, it has multiple variants. In general, the Simir is a light vehicle meaning that it can be damaged by small arms fire. Out of all the light vehicles in the game, it has the least amount of protection for the occupants similar to the LUV-A1 and Minsk 400 motorcycle. Because of its light nature, it is also very fast and has the capability to fit in smaller, typically urban areas like alleys and sheds. Both machine gun variants feature a restricted firing arc, which limits the gunner to firing to the front of the vehicle only. 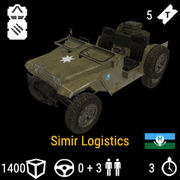 This variant is a light logistics vehicle which can carry up to 1400 supply points. It carries 700 construction and ammo points by default. 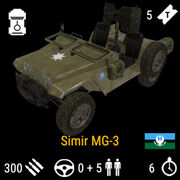 This is one of the armed variants, sporting an MG3 general purpose machine gun on the back with a shield for the gunner. 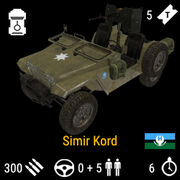 Another armed variant, this time sporting the 12.7mm Kord heavy machine gun. In both looks and function, the Kord behaves in the same manner as the NSV heavy machine gun. Like the MG3 Simir, this variant also has a shield for the gunner. 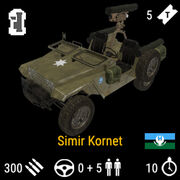 The anti-armor variant. This variant is armed with the 9M133 Kornet anti-tank guided missile launcher which is capable of engaging and defeating all forms of enemy armor. Unlike the emplaced launcher, this one only has a limited traverse towards the front of the vehicle. It serves as one of the light anti-armor vehicles of the MEA alongside the BRDM-2 Spandrel.