Edit
watch 01:54
Obi-Wan Finale - The Loop
Do you like this video?
Play Sound

There are a number of commands that can be executed on a running dedicated server while being in-game. With these commands, you can control how the server runs.

In order to enter a command, you have to open the console. On an English keyboard you access the console by double-tapping the ` (tilde) key on your keyboard. If this does not work for you, an easy workaround is to press the AllChat key J on your keyboard and then press backspace and remove the current command "ChatToAll" - now you have the console open and ready to use. You can repeat old commands in the console by pressing the cursor ↑ key. With the cursor ↑ ↓ keys you can also scroll through your command history and execute it with ↵ Enter.

If you face any problems with your server, please go to Server Troubleshooting.

There are also Debug Commands for testing purposes, however they are disabled on licensed servers. 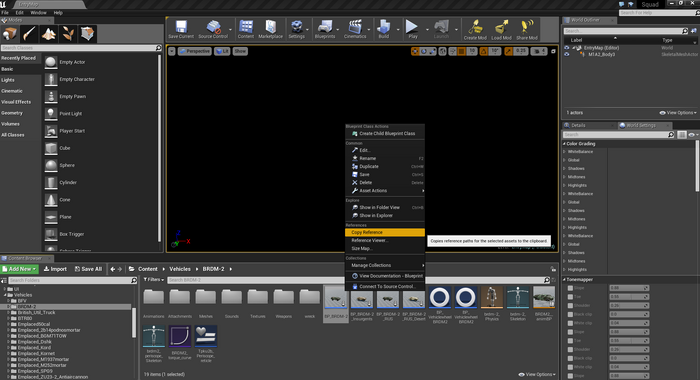 Deployables can be spawned by admin command in nonlicensed servers.

A deployable spawns on the player's location and because deployables do not obey gravity these map spawn floating in the air.

The items spawned will be unassigned to any team.

Crash dumps are helpful files that show more advanced system details at the time of a server crash.

1. Navigate to your squad server directory.

2. Navigate to the following file:

4. Create a crashes folder at:

ALL CHANGES BELOW HERE IMPACT SYSTEM WIDE SETTINGS AND ARE ONLY REQUIRED FOR FULL COREDUMP/CRASHDUMP FILES.

5. Make sure ulimit for cores is greater than 0. Having too small of a number may result in core dumps being cut off.

Run this command in any terminal:

It may also be necessary to increase the per process file handle limit:

This should only be done if your crash log has error "failed: errno=24 (Too many open files)" as a log line right before the callstack at the end of the log

or alternatively editing your limits.conf file.

Changing these limits will require the SquadGameServer is restarted.

6. On systemd based distros (ubunto/debian) the *systemd-coredump* package may also be required.

You can install this by running this command in any terminal:

It is suggested to adjust systemd settings regarding core file size or you may see core dumps being cut off.

Navigate to /etc/systemd/coredump.conf and edit the following lines:

A server restart is required for the settings changed to take effect.

Crash Minidump and logs will appear in:

Each crash will create its own folder labeled:

Full core dumps will be created where your system creates core dumps. For systemd-coredump systems they will be located in:

It is possible to force a crashdump by using this command in any terminal:

Replace pid with the process id of the SquadGameServer process.