The Minsk 400 Motorbike is one of the Transport Vehicles in Squad. The Minsk 400 is a Soviet-Belarusian copy of the German DKW RT 125 motorcycle. 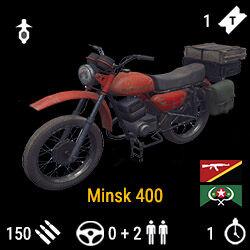 The Minsk 400 is a Soviet Belarusian two-stroke copy of the German KDW RT 125 motorcycle. It was designed by the Minsk Motorcycle and Bicycle Plant [Minskiy motornyy i velosipednyy zavod (Минский моторный и велосипедный завод)/MMVD] by order No. 494 of the Ministry of Automotive Industry of the USSR. The Minsk Motorcycle and Bicycle Plant was privatized in 2007, branding a new name for themselves, M1NSK , in which they changed the 'I' into a '1'.

The Minsk 400 is only used by one faction, the Insurgents. The Minsk 400's cheap ticket value, short respawn time, and small passenger capacity make it very expendable.