The Mi-8 is an air support vehicle in Squad. The Mi-8 is the standard tactical utility transport helicopter of the Russian Ground Forces. It was added in the Alpha 16 update. The Mi-17 is a export variant and is used by the Middle Eastern Alliance, added in the v1.0 release. 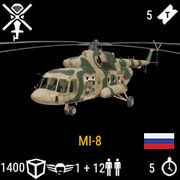 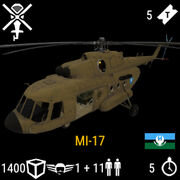