The MT-LBM IFV is a Fire Support Vehicle added to Squad during update A9. The MT-LBM was adopted as the standard multi-purpose fully amphibious auxiliary armored tracked vehicle of the Russian Ground Forces (RGF) in the late 1990s. The MT-LBM is the modern variant of the Soviet MT-LB APC which was used by the Red Army until the collapse of the Soviet Union.

The MT-LBM is a Russian multi-purpose fully amphibious auxiliary armored tracked vehicle as well as an armored personnel carrier (APC) and infantry carrier vehicle (ICV) developed by Muromteplovoz in the 1990s. The MT-LBM is the modern variant of the Soviet-era MT-LB which was designed by the Soviet Central Auto and Tractor Directorate in the 1960s. The MT-LBM was adopted as the the standard multi-purpose fully amphibious auxiliary armored tracked vehicle of the RGF in the same decade it was developed. There are many variants of the MT-LBM as it has a wide array of armaments.

The MT-LBM is used by the Russian Ground Forces, Middle Eastern Alliance, and Irregular Militia. 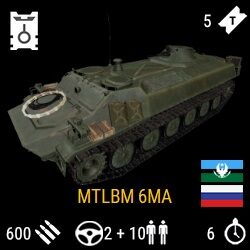 The MT-LBM 6MA is used by the Russian Ground Forces and Middle Eastern Alliance. The 6MA is equipped with a 14.5 mm KPVT Heavy Machine Gun, the same armament as the BTR-80 and the BRDM-2 Armoured Car. Its armament neatly bridges the gap between the 6M and the 6MB variants. Whilst the 6M's NSVT is excellent for dealing with infantry and the 6MB's 30 mm cannon shreds lighter skinned vehicles, the 6MA's KPVT is well known for decently handling both threats. Simply put, it's an MT-LB with the KPVT heavy machine gun turret.

The Middle Eastern Alliance have a unique variant the of the 6MA equipped with a UB-32 rocket pod, similar to their own BRDM-2. In practice, they share the same turret. The only real difference is that the 6MA is an APC, requiring a Crewman kit to operate. It is also slower and tracked. 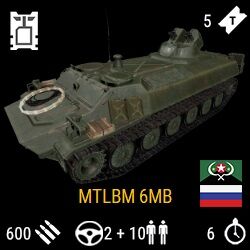 The MT-LBM 6MB is used by the Russian Ground Forces as well as the Irregular Militia. Instead of using a machine gun, the 6MB has a 2A72 30mm autocannon as its main armament, located in a turret at the rear of the vehicle, which can fire armor-piercing rounds that can shred lightly armored and unarmored targets in seconds, or high explosive rounds to deal with infantry threats. This makes the 6MB a prominent threat to the support vehicles of any faction, from the Technical to the M1126, The 6MB's weakness comes from the fact that it is still an MT-LBM variant, sporting weaker armour and lower top speed than other similar vehicles. The M1126 and BTR-82 are faster and better armoured, and the M2A3 and FV510 have frontal armour that it cannot penetrate. The MT-LB-6MB also employs a coaxial PKT general purpose machine gun.