The MAN HX is a transport and logistics vehicle featured in Squad. The HX60 is a general purpose tactical military truck that is used by the British Army as its standard support vehicle since 2004.

The HX60 is a family of general purpose tactical military trucks designed in 2002 and manufactured in Germany. It mass produced in 2004, and sent into service in 2007. The MAN HX was ordered by the UK Defence Procurement Agency in October 2004 to fulfill the British Army's need of a support vehicle. Several variants of the HX60 are made and the HX60 is distributed to a number of operators around the world.

The HX60 is only used by the British Army as their standard transport and logistics vehicle. 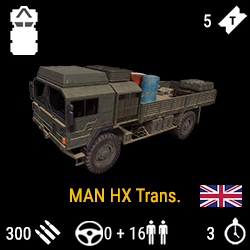 The HX60 Transport variant is best for fast movement of a squad to different places around the map. 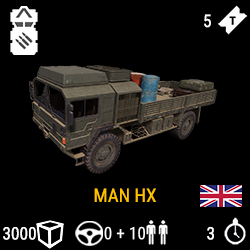