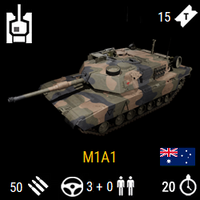 The M1A1 AIM SA is the official designation for the Australian M1A1 variant, weighing less than the M1A2 at 63 short tons. The M1A1 is 9.83 m (32.25 ft; including main gun length) long. Width and height are the same as the M1A2. All crew members required to operate the M1A1 are the same as the M1A2. Like the M1A2, the M1A1 is highly mobile, well-armed, and heavily-armoured. The armour, ammunition, and systems differ slightly, however. The M1A1 AIM operates KEW-A2 APFSDS (a tungsten variant of the M829A2), a non depleted-uranium armour package, and an Integrated-Management Situational-Awareness (AIM SA) system upgrade. Additionally, a Mag58 occupies the coaxial and pintle mounts, with the M1A1 being slightly more agile than the M1A2, considering the 7 ton weight difference.

The M1A1 is used by the Australian Army and the M1A2 used by the US Army. They are fairly similar in-game, as many technological advancements were not included.