The Mine-Resistant-Ambush-Protected (MRAP)-All Terrain Vehicle (M-ATV) is a fire support vehicle available in Squad. The M-ATV was adopted by the United States Army (US Army) in 2009 as the standard MRAP-replacement light vehicle.

The M-ATV is a 5 crew, 4-wheel mine resistant ambush protected (MRAP) all terrain vehicle (ATV). The vehicle was designed and built in 2009, and adopted by the US Army in the same year as the standard light MRAP.

The M-ATV is only used by one faction: the US Army.

Picture of the CROWS system as seen from the gunner seat: 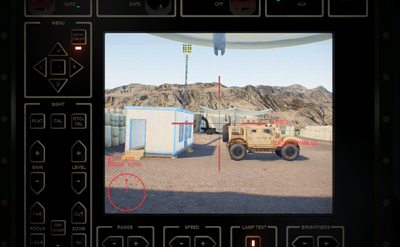 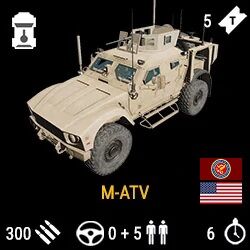 The vanilla variant that is armed with an open-top .50 caliber M2A1 heavy machine gun. Unlike emplaced .50 caliber machine guns, the one on this variant still uses iron-sights, which makes engaging targets at range difficult. The gunner is also exposed to enemy fire, but also tends to maintain better awareness of what is happening directly around him.

A variant of the M-ATV which is equipped with an M240B general purpose machine gun in place of an M2A1. There are both open-top and CROWS variants of this vehicle. This variant opts for a smaller anti-infantry machine gun with a much larger supply of ammunition. Players must remember that by choosing this variant, they are giving up any ability to damage armoured vehicles. Technicals, Transport Tucks and, Logistics Trucks can still be seriously damaged or destroyed, but this is primarily an anti-infantry ONLY variant. 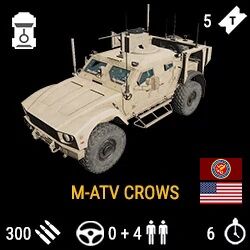 The M-ATV CROWS variant comes with a unique CROWS remote operated turret, with a .50 caliber M2A1 heavy machine gun. The turret offers the gunner far greater ability to zoom in and acquire a target, and keeps the gunner protected inside the vehicle. The gun has 400 rounds and its ammo can only be replenished at repair stations. Added in Alpha v11, the CROWS weapon system on the M-ATV was reworked with an ammunition tracker, rangefinder, turret orientation indicator, and 3 levels of zoom. 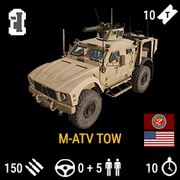 The M-ATV TOW is a variant of the M-ATV that carries a BGM-71 TOW anti-tank guided missile launcher in place of a machine gun. Gameplay wise, it is essentially the same as the TOW emplacement that can be built at FOBs except mounted on a mobile platform. The vehicle carries a total of 6 missiles, which have the same range and damage as a standard TOW. Considering that the only other mobile ATGM platform the US possesses is the M2A3 (which carries only two missiles), the M-ATV TOW is a relatively cheap and simple way for the US to deploy ATGM stopping power at low ticket cost. It is the US Army equivalent of the BRDM-2 Spandrel of the Russian Ground Forces. 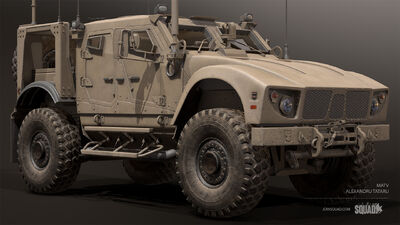 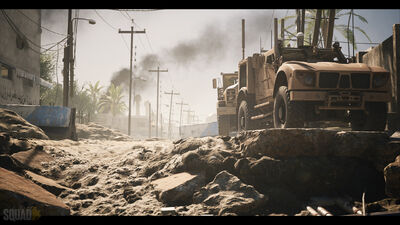