The Leopard 2A6M is a main battle tank featured in Squad. It was introduced in the Alpha 15.3 update with the Canadian Army.[1] 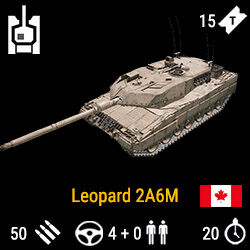 The Leopard 2 is a main battle tank developed in the 1970s. The tank first entered service in 1979 and succeeded the earlier Leopard 1 as the main battle tank of the German Army. Various versions have served in the armed forces of Germany and other European countries, as well as several non-European nations, including Canada.

Canada has used the Leopard 2 in Afghanistan, where it loaned around 20 tanks from Germany, which were then upgraded to the 2A6M standard. To help with the Afghan environment, further modifications like slat armor, better air conditioning, and thermal nets were also able to be installed. These upgraded 2A6Ms in Canadian service are known as the Leopard 2A6M CAN, denoting their modification and operators.

The Leopard 2A6M is the main battle tank available to the Canadian Army. It can hold a crew of four: a driver, gunner, commander, and a loader. The variant depicted in game is technically the Leopard 2A6M CAN, the Canadian designation and modification applied to their Leopard 2A6 tanks which allows the installation of features like slat armor, among others.