The LAV III is a vehicle featured in Squad. It was introduced in the B21 update for the Canadian Army.

The LAV III, is the third generation of the Light Armoured Vehicle (LAV) family of infantry fighting vehicles built by General Dynamics Land Systems, first entered service in 1999. It was developed in Canada from the LAV II family and is the primary mechanized infantry vehicle of both the Canadian Army and the New Zealand Army. It also forms the basis of the Stryker vehicle used by the US Army and other operators.

The LAV III is powered by a Caterpillar 3126 diesel engine developing 350 horsepower (260 kW), and can reach speeds of 100 kilometres per hour. 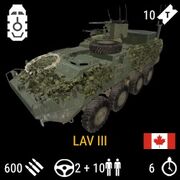 The LAV III functions as the primary APC of the Canadian Army. In both looks and function, it is very similar, if not equal to the M1126 APC of the US Army.

The LAV III M2A1 RWS. It is armed with the exact same .50 caliber M2A1 CROWS as the M1126 and M-ATV CROWS, with an additional pintle-mounted C6 general purpose machine gun for the third seat.

The C6 machine guns for the third seats only have a limited traverse towards the front of the vehicle, while the CROWS machine guns can rotate 360 degrees. They share the same UI as the one used by the M1126 APCs and M-ATV CROWS. As stated, the LAV III functions almost in the exact same way as the M1126, just with an additional gunner's seat. This can give the LAV III an advantage when fighting enemy infantry, picking off unarmored vehicles like trucks, and even popping the tires of wheeled vehicles. The second gunner is exposed however, and only has a limited frontal traverse. And as with most machine guns, the LAV III's machine guns can overheat with sustained fire. It is therefore a good idea to fire the guns in bursts to always keep them cool.