Players in Squad must select a role before they can spawn in. The role determines what kit (equipment) your soldier has, ranging from your rifle, grenades, rockets, and special items. The role you select largely influences what you will do on the battlefield; from reviving and healing other players, providing suppressing fire, to destroying enemy vehicles. The available roles depend on the faction. For instance, the Raider is only available to the Insurgents and an extra Marksman is available to the British Army. Many of the roles have multiple kits to choose from, meaning you can change your equipment load out (if available). Roles are restricted based on various factors; see the Role Restrictions section for more information.

At the beginning of each match and after a player dies they can choose which roles they wish to spawn in as. Within the Deployment Menu (default ↵ Enter) players can see more details of each role in the Role Loadout tab or a more condensed view in the Deploy tab. Players can also change their kits in-game at an Ammo Crate or at a vehicle, although restrictions do apply. Note that when you switch roles outside the deployment menu, players must pay the full cost of the kit in ammunition points, and if players switch kits in the Deployment Menu, they will spawn in with the minimum allocated ammunition. The only exception to this is if players use an Ammo Crate or spawn at the main base or it's the first time the player spawns during the match. Players must be careful to not select a new Role/kit outside of main as this can cost the team a lot in ammunition points.

Roles are broken into four different role classes; Command and Support, Squad, Fire Support, and Specialist. Below you will find information on each role. 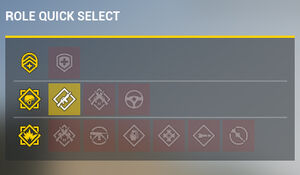 The majority of roles in Squad are restricted in some way. There is a kit limitation system which, in short, means the roles available to choose from depend on different parameters, such as the size of the squad and how many of the roles have been claimed by other players. This post discusses these limitations and the reasons for. There are four basic types of limitations; Squad-Size Limitations, Role Limitations, Role-Type Limitations, and Team-Wide limitations.

Squad-Size Limitations The most fundamental limitation is the size of your squad. As the number of players in a squad increases more roles become available, and vice-versa. In other words, roles require a certain squad size. Many roles, such as the rifleman, have certain kits that are unlocked based on the squad-size as well. See the Squad-size kit restrictions below for more information.

If kit limitations have changed and made a kit no longer available that was previously claimed, a player can continue to use the kit until they change to another kit. In other words, if kit limitations remove a kit, this won't snatch it away from you at the same instance. This is to prevent other players from intentionally claiming kits by leaving and re-entering squads.

The following is a list of the Specialists and Fire Support roles that are restricted to a maximum number per team. These restrictions are applicable across all factions. In addition, these roles are unlocked when the team reaches a minimum number of players. Based on Alpha 13 patch notes.

The following faction-based tables show when a kit is unlocked based on the squad size. As the squad size increases, additional kits are unlocked and available for the squad members to choose from.

Priority 1 and 2 should always be filled.

Priority 3, 4 and 5 should be discussed based on the map and the task your squad is going to complete - speak with your Squad Leader.

If you mouse-over the symbols in the Role tab, you will see a tooltip with details about each role.