The FV510 is an Infantry Fighting Vehicle (IFV) added to Squad in update V11. It is operated by the British Army. 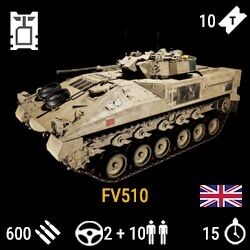 The FV510 is the principal variant of the FV510 IFV family. Design work began in the 1970s to find a replacement to the FV430 series of vehicles with a vehicle designated as the MCV-80, which eventually became the FV510. Today, a total of 789 FV510s are in service in the British Army while 254 of a modified variant named the Desert FV510 are in service in the Kuwaiti Army.

The FV510 platform is used only by the British Army.

Three versions of the FV510 platform exist in game; The regular, older version (named the FV510), a newer variant with increased armor protection (named the FV510 UA), and the FV520 CTAS UA which was added with the release of v2.0. The first two variants are the "regular" variants, equipped with the 30mm RARDEN autocannon and lack turret stabilization. The UA variants are distinguished by their additional applique armor on the front and sides, increasing overall protection. The FV520 is distinguished by its radically different turret, equipped with a 40mm autocannon which fires telescoped ammunition and comes with turret stabilization. The hull is the same as the FV510 UA. All other operating aspects like speed, passenger capacity, health, and armor remain the same with all three variants.

Matchups Against Other IFVs:[]