The FV107 (Scimitar) is a tracked reconnaissance vehicle featured in Squad[1] added during V 2.0. It is used exclusively by the British Army, and is similar in function to the BRDM-2. With a high top speed, good off-road capability, and a powerful, if somewhat antiquated, 30mm cannon, the FV107 is a dangerous hunter of lightly-armoured targets. 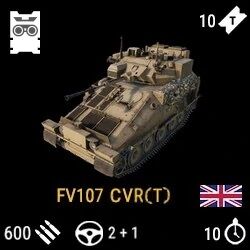 The Combat Vehicle Reconnaissance Tracked (CVRT) family is a series of armoured vehicles developed by the Alvis company in the 1960s for use in the British Army. Designed to be small, highly mobile, and air transportable, the series includes several different variants such as the Scorpion (76mm cannon), Spartan (APC), Samaritan (Armoured Ambulance), and Samson (ARV), each with different roles to play on the battlefield, but based on the same general design.

The Scimitar is similar to the Scorpion, but it was armed with a 30mm RARDEN cannon instead of the cannon found on the Scorpion. Entering service in 1971, the Scimitar has seen extensive service with the British Army, with 328 in service in 2006, they participated in the Falklands War, the First Gulf War, the 2003 Invasion of Iraq, and Operation Herrick in Afghanistan. With a wide-variety of ammunition including Armour Piercing Discarding Sabot, the Scimitar is credited with the destruction of Iraqi T-55s and T-62s.

The FV107 is manned by a crew of three: a driver, gunner, and a commander.