An entrenching tool is a compact shovel, used by military forces for field engineering purposes. In Squad, every kit includes an entrenching tool, except for the Squad Leader kit. Entrenching tools are critical to gameplay and every player must understand its purpose. The primary purpose of the entrenching tool is to build and deconstruct deployable assets placed by a Squad Leader. In order to build, hold Left-Mouse-Button to build an object placed by a Squad Leader, and hold Right-Mouse-Button to destroy it. Note that a digging animation occurs when a player is building an asset, whereas the player will "hit" an asset with the entrenching tool when deconstructing it. Damaged assets can also be repaired to 100% health using the entrenching tool. Tech structures and emplacements don't have to be fully constructed in order to use, but it is recommended so that they have full health. Objects take longer to deconstruct than they take to build, regardless if an enemy or friendly player is performing the action. If a Radio Hub is deconstructed by the enemy team, your team will lose 10 tickets. However, if your team deconstructs the Radio Hub your team will not lose any tickets. Other uses for the Entrenching tool include burying and destroying mines, as well as destroying the satchel charges placed by Combat Engineers and Sappers. Note that the Combat Engineer and Sapper build and destroy deployable assets 50% quicker than other kits. 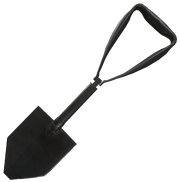 Standard US Military Tri-Fold spade since the Vietnam War era, E-tool consists of steel blade with serrated edge and folding two-stage plastic or aluminum handle. Was adopted by military forces of most of NATO members and satellites. 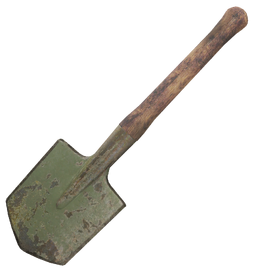 50cm length Small Infantry Shovel, almost identical to its predecessor from 1870, was USSR military standard entrenching tool. Even today military forces of many countries are using this simple and reliable tool.