Deployables are structures that Squad Leaders and FireTeam Leads can deploy within the 150-meter build radius of a Forward Operating Base. Once deployed, these structures require other players to construct using the Entrenching tool. Deployables allow players to change the tactical situation anywhere on the map. Forward Operating Bases are designed to support your team in achieving the gameplay objectives by providing Spawn points, resupply in the form of ammo crates and repair stations, cover in the form of fortifications, as well mortars, heavy machine guns, and anti-tank guided missiles, in the form of emplacements.

Once a Radio Hub has been placed and supplied with construction points from a Logistics vehicle or helicopter, deployable assets can be built within 150-meters of where the Radio was placed. The Squad Leader or Fireteam Lead chooses deployables from the Deployables Menu by holding down the default T. Once a deployable is chosen it can be rotated with the arrow keys.

After a Radio Hub is placed, the FOB widget appears. Ammunition and supplies begin at 0. Logistics Vehicles or helicopters will be needed to provide additional resources for the Forward Operating Base. The progress bar displays the health status of the Radio Hub. The ammo counter, number to the left, shows the available ammo supply at this FOB.

The construction supply, the number to the right, shows the supply balance you have available for building objects.

The icon below the ammunition and supply counters displays the status of the Forward Operating Base as a spawn location (designated Inactive or Active).

With the Radio Hub deployed and with enough supplies accumulated, the Squad Leader can build deployable assets within a 150m-radius of the Radio Hub. Open up the deployables menu and choose the object with the mouse and click the Left-Mouse-Button to select it. You will now see a red or green shape of the object. Red means you cannot place it at the moment, green means you can place it. Move around with this shape to choose a suitable location. Click the Left-Mouse-Button to set down the object when it is shown in green, click the Right-Mouse-Button to cancel the build.

When the Squad Leader is able to place the green shape, construction stakes appear at its location and team members need to start the construction by using their shovels. Stand near the stakes and aim at them, then hold the Left-Mouse-Button to start building the objects. Note that you can only shovel if you are next to a constructible object (very useful!) and shoveling will also automatically stop after the object is finished. Except for the Radio Hub, all objects need to be shoveled to be fully constructed. The more people that shovel, the quicker the construction is finished.

A few objects can be stacked on top of themselves. This way, for example, you can build a tall wall of Sandbags. You can also build objects on top of houses and other locations. The construction of deployables goes through three stages. You physically see the progress of these three stages in the game – there exists no progress bar.

Building of emplacements happens in 3 stages:

Using an emplacement such as an ammunition box requires it to be in its final stage of completion, otherwise it won't be usable.

You can take down your own or enemy deployables with your shovel and holding down the Right-Mouse-Button. It will deconstruct the object until it disappears.

You can also use explosives, rockets, grenades and high caliber vehicle weapons with varying effectiveness against deployables.

Destroying deployables happens in the same 3 stages as construction in reverse order. That means that reaching the second stage while destroying an object renders it unusable until it's reconstructed to final stage again. That is especially useful when deconstructing enemy spawns, as you don't need to worry about enemies spawning on you while you're destroying their spawn. To destroy a deployable completely you have to keep digging until the lowest stage (foundations) is gone, too. 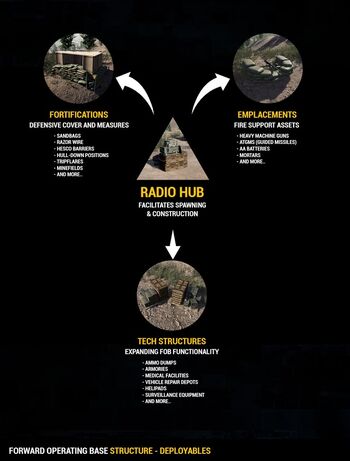 Before you can create any deployables, you need to place a Radio Hub and add sufficient

These are the structures essential to the proper use of the FOB.

These are structures that are used to provide shelter and cover from enemy fire, provide access to higher areas like onto roofs, or seal of areas.

These are the stationary weapons which can be used by both friendly and enemy infantry (MEA information is missing here).

Since the update of V2.0, if a deployable was dug down before fully built, refunds 80% construction points it costs. This mechanic is intended to reduce the penalty for accidental bad placement of the deployables.