The BTR-82A is an Armored Personnel Carrier (APC)/Infantry Fighting Vehicle (IFV) added to squad during the Alpha V9 update. In-game it is used solely by the Russian Ground Forces (RGF). It sacrifices armor protection for speed, making it faster but also considerably weaker than other IFVs in-game. 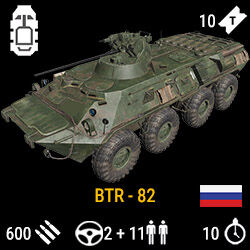 The BTR-82A is a modern 8-wheeled APC. It was designed by the Arzamas Machinery Plant in 2009 and adopted into the RGF in 2013 as their standard APC and infantry carrier vehicle (ICV). The BTR-82A is still primarily used by the RGF. Although both the Belarusian and Bangladeshi governments expressed interest in acquiring some of their own, only the Republic of Kazakhstan actually purchased any. BTR-82A production ceased in 2015, replaced by an upgrade program designed to modernise all BTR-80s to a standard similar to the 82A. BTR-80s that have been upgraded in this fashion are designated as BTR-82AMs.

The BTR-82A weighs over 16 metric tons, is 24.87 ft (7.58 m) long, 9.79 ft (2.985 m) wide, and 8.94 ft (2.725 m) tall. The BTR-82A can be driven by 3 crew members and can hold up to 7 passengers. The BTR-82A has better armor than the BTR-80, featuring Improved laminate armor along the bottom of the hull, spall liners along the interior walls and ceiling, a ballistic mat on the floor of each troop compartment and possibly under the troop seats, likely with the same effect as the spall liner. The commander's and gunner's sights were replaced with more capable systems. The gunner's searchlight was replaced with a PL-1, and later an LP-1 infrared spectrum pulse laser searchlight. The vehicle has a more powerful 300-hp and fuel efficient engine, increasing its cruising range from at around 600-km to at least 700-km. The BTR-82A is fitted with a 2A72 cannon as its primary armament, and a coaxial PKT machine-gun as secondary armament. The vehicle can reach a maximum speed of 49.71 mph (80 km/h).

The BTR-82A is only used by one faction, the Russian Ground Forces. The BTR-82A is not a dedicated infantry fighting vehicle (IFV). As a result, it struggles to hold its own against other IFVs such as the FV510 and the M2A3. In fact, the BTR-82A has inferior armor protection compared to many APCs. It is a fast troop transport armed with an autocannon that is efficient at engaging enemy infantry and light vehicles. Nothing more, nothing less. Be ready to immediately retreat if you start taking heavy fire.