The BRDM-2 APC is one of the fire-support vehicles available in Squad. It is available only to the Insurgents, Irregular Militia, Russian Ground Forces and Middle Eastern Alliance.

The BRDM-2 Scout Car is armed with a 14.5mm KPVT heavy machine gun, a coaxial PKT general purpose machine gun, and smoke launchers. It is a fast light attack vehicle, whose armor is immune to small arms fire. None of the occupants can be shot from outside the vehicle. Like other light attack vehicles, it does not need a Crewman kit to operate. It has three seats for a driver, gunner, and vehicle commander. It also carries 300 ammo points for resupplying troops and FOBs.

The MEA have an exclusive variant of the BRDM-2 Scout Car equipped with a turret-mounted UB-32 rocket pod which fires S-5 rockets, the same ones found on the rocket artillery Technicals of the Insurgents and Irregular Militia. These rockets are powerful and have long range, but they are very inaccurate. They can also be used against enemy armor and is actually pretty potent, provided the rockets hit the intended target. A full salvo of 32 rockets is enough to kill any IFV in the game. The rocket pod is semi-automatic, but has a generous fire rate cap enabling the gunner to fire the full salvo of 32 rockets in under a minute. Firing the rockets generate a small amount of backblast which can damage and even kill anyone behind the launcher when it fires. Unlike the rocket Technical, the BRDM-2 rocket pod only comes with 32 rockets, which means once depleted, they can only be rearmed again at a Repair Station. They also take a considerable amount of time to rearm. 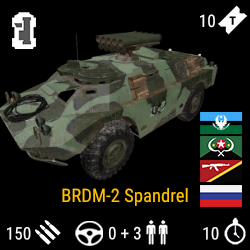 The primary strength of this variant is its combination of mobility and firepower. Most of the other vehicles that carry ATGMs are either much slower, larger (far easier to spot), or less maneuverable. The only other vehicles that have similar mobility, and carries missiles are the M-ATV TOW and Simir Kornet. Even then, they can fire only one missile at a time, and has to reload after every shot. This vehicle allows a team to deploy powerful anti-tank capability much faster and much cheaper than any other option currently available in-game. It has an extended respawn time however, similar to that of an APC.

The BRDM-2 is a four-wheel Soviet Russian amphibious armored patrol and scout car. It was designed by V. K. Rubtsov in 1962 and adopted by the Soviet Army in the same year as the standard armored patrol car for their military forces. The BRDM-2's military service ended in 1991 when the Soviet Army dissolved, and the Soviet Army's successor, the Russian Ground Foces, adopted the BRDM-2's modern variant, the BRDM-2M in the same year. The BRDM-2, like all of the Soviet Union's vehicles, was exported to many Communist-aligned countries. Many variants were created out of the BRDM-2, such as the Polish BRDM-2M-96 and the Ukrainian BRDM-2D.

The BRDM-2 was adopted as the standard armored patrol car of the Soviet Army from late 1962 to 1991, replacing its predecessor the BRDM-1. The Soviet Army's successor, the Russian Ground Forces (RGF), later used the BRDM-2's modern variant, the BRDM-2M, as the standard multi-purpose fully amphibious armored patrol car in 1991. Like all Soviet equipment, the BRDM-2 was also sold to many Arab and African countries. It is currently used by 38 armies. The BRDM-2 enjoyed popularity on the export market because it was cheap, easy to operate and reliable. These factors also make it extremely popular with Insurgents and Irregular Militia forces. It is unknown if the vehicles amphibious abilities will become useful in later updates to Squad if large bodies of water are added.

The BRDM-2 is used by both rebel factions: the Insurgents and the Irregular Militia, and the upgraded version is used by the Russian Ground Forces. Its armour protects it from all forms of small arms fire and grenades, and it's KPVT 14.5mm heavy machine gun gives it the same firepower as the BTR-80 whilst being considerably smaller. The BRDM-2 is also the second fastest vehicle in Squad, which can prove an advantage in mobility and ambushing.