In general, Ammo Crates are constructed near a Spawn Bunker so players can quickly resupply after spawning. Ammo Crates placed near the parameter of the 150 meter Forward Operating Base build radius or near the front line will allow infantrymen to resupply more readily. Resupplying a Forward Operating Base with ammo points to allow players to rearm with Ammo Crates should be a priority for the team. See Logistic System for more information. Without the ability to rearm their equipment, players will find themselves out-gunned by the other team and lacking vital equipment. Ammo Crates can be destroyed by digging them down (right-click with the Entrenching tool) or when damaged by explosive munitions.

To use an Ammo Crate, move near it then press the interact key (F by default) to open the radial menu. Right click to exit the menu or left click the back arrow. 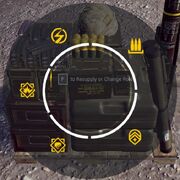 Once this window is open, all items can be reloaded with a single click (if the ammo points are available) or individually (granularly). Left-click to add an item to rearm, then click on the center button to rearm just what you have selected. To rearm all your equipment, click the center button without selecting individual. See below for specific rearm costs for every piece of equipment in-game. 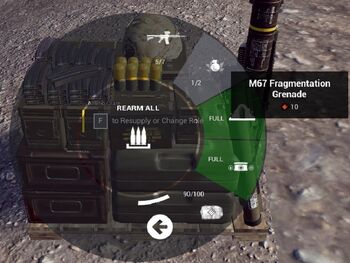 Besides rearming, the ammo crate also allows players to switch kits. The other icons correspond to the four role types; Command and Support, Direct Combat, Fire Support, and Specialist. To change kits, select the role type the respective kit falls under, then select which kit you would like to switch to. Note that you can only switch to kits that are available and if the ammo points required to change kits are available. See Kit Role Selection for details on kit restrictions. The cost to switch kits is the total sum of all the ammo points it would cost to fully resupply that kit. For instance, the cost to switch to the Insurgents secondary Light Anti-Tank kit (with Skorpion) is 212 ammo points. This is the same cost of resupplying this kit if it had no ammo.

Resupplying at an ammo crate will cost Ammo Points as of alpha 13: