The ASLAV-25 is an infantry fighting vehicle featured in Squad.

The ASLAV 8×8 wheeled light armoured vehicles are procured under the LAND 112 programme. The vehicles are designed to conduct reconnaissance and surveillance activities over large distances with minimal logistic support. The project has progressed in four phases.

The ASLAV-25 is only used by the Australian Army as their primary IFV.

The gameplay style of the ASLAV-25 is not that different from the Canadian Army's LAV 6.0. It essentially carries the same weapons, just without a pintle-mounted machine gun for the 4th passenger. 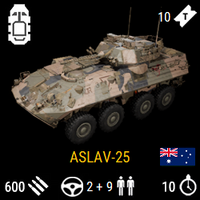